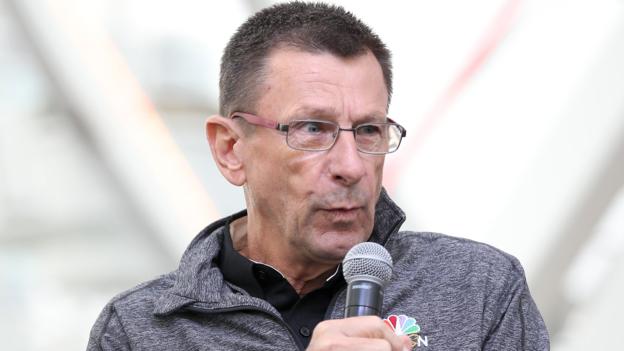 On the 2nd December 2018, it was announced that the ‘Voice of Cycling’ Paul Sherwen had died of heart failure, aged 62, at his home in Kenya.

Paul Sherwen was born on the 7th June 1956, just ‘down the road’ from me in Widnes, (Northwest England).

He grew up in Kenya, where his father ran a fertiliser and pesticide-manufacturing factory.

Paul was reasonably athletic, coming second in the Under-14 Swimming Championships in Kenya, and when he returned to the UK at aged 16, took up cycling, joining the Weaver Valley Cycling Club.

Having developed a successful amateur cycling career, winning the Manx International and the Archer Grand Prix, he turned professional in 1978, initially joining the Fiat Team and then in 1980 joining the La Redoute cycling team.

He was chosen to ride the Tour de France in his first year as a pro cyclist, finishing in 70th place. This was his highest placing in any of his Tour de France rides.

During this period, his palmares was consistent, if not spectacular.

Paul joined the Raleigh team in 1986, before retiring from pro cycling in 1987, becoming the British National Road Race Champion in his final season.

He then spent a couple of years managing the Banana-Raleigh Team, until they pulled out of Professional Cycling in 1989. A spell as the Public Relations Director for the American Motorola Team followed.

In early 1986, fellow cyclist Phil Liggett approached Paul to see if he would be interested in co-commentating with him on the Tour de France.

They made their first broadcast in July 1986, and have described the action on very TdeF since then.

A number of television networks, including Australia’s SBS Network, and the US NBC Sports, and of course, not forgetting, our own UK ITV4, took their commentary.

That is where in 2007, I joined the legion of fans listening to the easy conversational style of “Phil & Paul”.

To everyone in the cycling world, Paul Sherwen will be greatly missed.