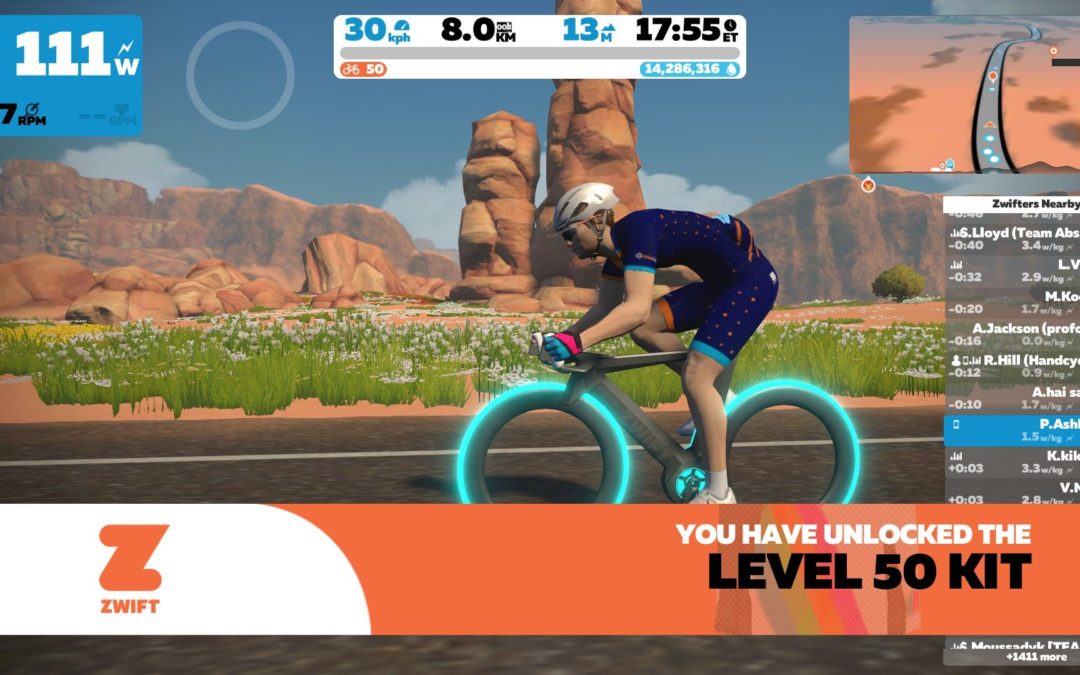 Zwift is a popular multiplayer online, cycling and running, physical training programme that enables users to interact, train and compete in a number of virtual worlds.

A fully-fledged product was launched in October 2015, with a monthly subscription of $10 USD (£8 GBP).

Zwift has grown massively in the last six years. Initially there was just one ‘world’ (maps), there are now a total of 11 worlds with some 88 recognised ‘Routes’, totalling some 1,500miles (2,400kms) of riding.

There are 3million registered Zwift accounts, however, it is a very closely guarded secret, of how many full paying subscribers there are.

There are currently 50 Rider Levels in Zwift. Everyone begins at level 1, and you move to higher levels by accumulating XP (experience) points.

Every time you ‘Level Up’… (move to the next level) you unlock new kit or accessories.

There are a number of other ways you can gain XP Points, such as Workouts or Route Achievement Badges.

The first time you complete a route – you receive a Completion Badge and extra XP points – these vary from 60XP to 3,460XP (The PRL Full).

Level 50 is a fairly exclusive Club – approx. 0.7% of Zwifters have reached that Level, it costs a lot in terms of commitment to ride, as well as a financial commitment.

Once you reach Level 50, what comes next…?

In my case finishing off the last couple of Route Badges (3) and that elusive 100kph Badge.!

It is also rumoured that new Levels will be added to the Game, possibly sooner that later, or even a new structure? (Forbes Magazine interview with Eric Min; 21 Feb 2021).

I started riding inside on rollers, after I ‘fell off my bike’… I started with a set of basic rollers, and within a couple of months graduated to an Elite Qubo Digital Smart B+ Trainer.

This was one of the cheapest Smart Trainers available. It was a wheel on trainer, and worked well.

16 months later, it burnt out and was no longer acting as a Smart Trainer. After a number of emails with Elite in Italy, they diagnosed that the circuit board had ‘gone’ and sent me a new one.

I fitted the new one, but there was a programming fault (which Elite knew about), where the trainer could not settle to a fixed Power Output. It took at least 5 mins to settle.

They eventually agreed, to replace the complete machine, I decided to upgrade to a Wahoo Kickr v5 (2018 version).

14 months with that one, it became very noisy… (grinding on the flywheel, something they are prone to do)… It was replaced under Guarantee… so I’m now on my 2nd Kickr…!

Overall, I’m very pleased with it.!

And I still have my rollers, if I want to ‘ride outside’…!