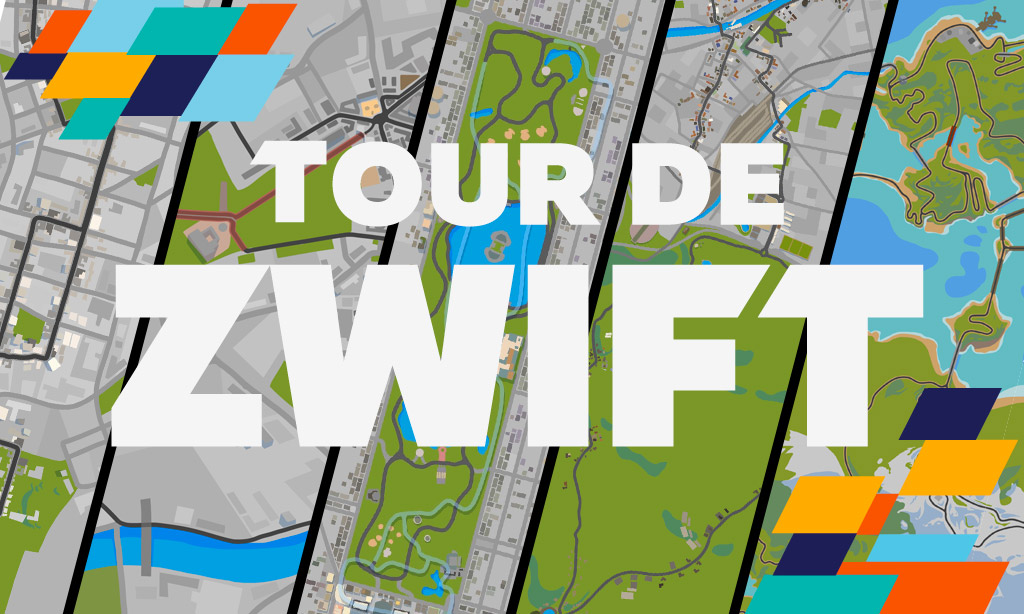 The Tour De Zwift is an annual cycling event held on the Zwift gaming platform, it is also their biggest event in terms of numbers participating.

It is an epic 9-stage event across all 5 Zwift worlds. Open to the entire community, the Tour is a celebration of Zwift and the worlds within.

You’ll experience the best of Zwift, together with thousands of people riding by your side.

It’s not a race, but a giant party on wheels and a great way to experience Zwift.

Whether you’re new to Zwift or a veteran of past tours, join the fun.

There are no ‘prizes’ except when you complete all 9 stages you’ll unlock the official Tour de Zwift kit and add the exclusive jersey to your collection.

Finishing all 9 stages is the only way to score the commemorative kit.

The Tour opens with Stage1 in Watopia — Zwift’s own fantasy island that has all types of incredible terrain.

Grab your mosquito nets for Stage 1, as we head deep into the jungle. We start with a rolling 13 km lead-in with one short climb.

From there it’s a descent to the Mayan Ruins of Watopia. From the waterfalls to the temples, we’re crossing into some stunning scenery.

I had received my replacement trainer, and was able to install it just before the start of the Tour de Zwift. If not fine-tune it…

Ouch – the difference between the rollers and a fully interactive trainer is harsh…!

Managed to get around the 2 laps – but no course records were broken…! And was struggling to get 250watts out for any length of time.

Something like 450 riders all taking part at the same time… although it is not a race, managed to finish 85th

You saw the Jungle; now get a glimpse of New York, set light years in the future. New York is Zwift’s latest world, released Autumn 2017

Stage 2 is a big climbing day with the Everything Bagel.

This route covers all roads in New York — those on the ground, and those above. We’ll take in the best sights like the Plaza, the Met museum, and the Zwift High Line.

We’ll hit the King of the Mountain and Sprint segments from both directions. Hard day, so enjoy that downhill.

I was a bit concerned with this one… had checked that the gearing was indexing correctly, and found that I couldn’t shift into the lowest gear…

That meant I badly struggled up the hills and KOM passes. On the rollers, I flew up them and even took a KOM jersey – not to be today! It was a longish ride that took in all of Central Park, with lot’s of overhead roads and a lop around the perimeter.

Plenty of groups formed, and broke up, so it was a little difficult to keep pace with a group for the drafting advantage.

A great ride, but will need to sort out the indexing on the gears.

For Stage 3, we’re travelling across the pond for our first day in London.

We designed this world on Prudential RideLondon, the worlds’ largest sportive.

If you think London is flat, think again. We’ll do a few laps in the heart of England’s capital, then it’s onto the rolling Surrey countryside for the tough climb of Keith Hill.

Around and around the Volcano we go in Stage 4.

We’ll start on the flats and are fired up before the ascent. This mountain not the tallest climb in Zwift, but a glimpse of what’s to come.

See if you can take home the KOM, or break your personal record. Knock this stage out and start the weekend off strong.

Ride the cobbles and celebrate — we’re at the halfway point of the Tour!

We’re in Richmond, site of the 2015 UCI World Championships.

This was the first Zwift world based on a real-life course. It has some short, cobbled climbs up Libby Hill and 23rd Street.

Insider tip: pace yourself on the flat sections after the start and save your legs for the later climbs. They’re short, but they hurt!

Here comes the queen stage. Stage 6 is a pivotal one, and certainly the most demanding.

We’ll start in the Mayan Ruins, which you may remember from Stage 1, and then it begins.

Alpe Du Zwift. With over a thousand meters of climbing, this is the biggest mountain in all of Zwift.

It’s based on the Alpe d’Huez, which is ridden regularly in the Tour de France, and is just as difficult. Pace yourself Zwifters!

Plan for an hour to an hour and a half of climbing or more. Make it up and you’ll be on top of the world.

Pack your bags for Innsbruck, Austria.

Innsbruck is world number four from Zwift and brings the Alps into your home.

Minus the bone-chilling snow. Stage 7 will be scenic and challenging.

After a quick city ride, you’ll travel under the autobahn and head for the climb.

You’ll face three sections of road pitch, with a short plateau in between. Rest up in the villages before the next effort. When you see the Swarovski giant, smile.

So we’ve made it to Stage 8 and we’re doing great. London calling once again.

We’re back for a loop of the city, and a Box Hill finish.

This is the same climb featured in the 2012 Olympic Road Race. The last two stages tested the legs, and you’ll need to dig deep once again.

But after the Alpe, this should feel like a speed bump.

The Tour De Zwift signs off with a stroll through Central Park.

We’re back in New York to recover from the intense stages so far.

Take in the sights along the Park Perimeter and chat up some friends, or make some new ones. Enjoy the park and a huge congratulation from everyone at Zwift.

9 stages of tough riding is no small feat, and you came up big.