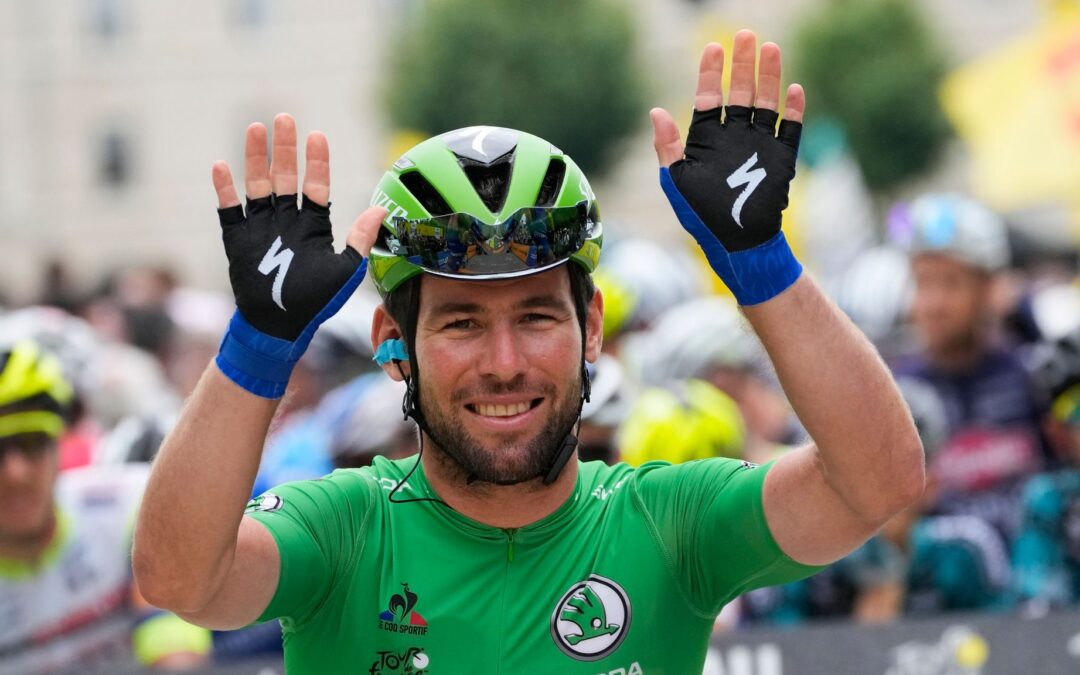 Mark Cavendish – the “Manx Missile” will, this year, not be defending his Green Jersey at the 2022 Tour de France.

A couple of days before the start of the TdeF, Cavendish won the British National Road Championship for the second time in his career.

However, news has already broken that Cavendish will not be part of the Quick-Step Alpha Vinyl Team, to defend the Jersey he won at last year’s race.

The 37-year-old is not the only big name to be overlooked by Quick-Step, with world champion Julian Alaphilippe also not in the eight-man team, but Alaphilippe is on the team’s reserve list

The eight-man team was announced on Monday afternoon, four days before the Tour starts in Copenhagen on Friday 1st July.

This means that Cavendish, will be stuck on 34 stage victories at the race, tied with Eddy Merckx.

It had already been reported that Alaphilippe would miss out, due to injuries sustained in a bad crash at Liège-Bastogne-Liège in April.

“I’m sad not to defend my green jersey or write even more history in the world’s most incredible bike race,” Cavendish commented.

Fabio Jakobsen was chosen ahead of Cavendish, who is in his second season with QuickStep, having ridden with them between 2013 and 2015. He is hoping to earn a new contract in 2023.

This may mean the end of Cavendish at Quickstep. It will be interesting to see if he is looking for a new contract before the season ends.

After his win in the National Championships, Cavendish said: “I can at least show the reason I am not going on the Tour is not because I have got bad form.”

And Bradley Wiggins commentated “None of it makes sense. I think he’s taken it really well. I think he’s shown what a champion he is. I almost feel like he’s got a new lease of life, he’s got a couple more years in him now.”

Having previously won the Points Classification in 2011 (as well as 2021) Cavendish’s former team mate David Miller said that leaving him out of the Team was “absolute insanity” and “the wrong decision on so many levels”.

But at 37 Cavendish is not getting any younger, and his replacement Fabio Jakobsen is in form and at 25 is some 12 years younger than him.

If I was a conspiracy theorist, you could say it was all a plot by the Belgians to keep Cavendish from beating Eddie Merckx’s record of 34 wins at the Tour de France.

The record has stood since 1975, and Cavendish is the only rider who has got anywhere near beating it.

Don’t forget, the Team Quick-Step Alpha Vinyl, is Belgian owned. Although one of the major shareholders is a Czech businessman. Eddie Merckx is Belgian and Patrick Lefevere the General Manager, is a Belgian former Pro Cyclist.

However, I do not believe I conspiracy theories, and just think they have gone with the younger rider.

Over the next three  weeks, we’ll see how it all pans out.