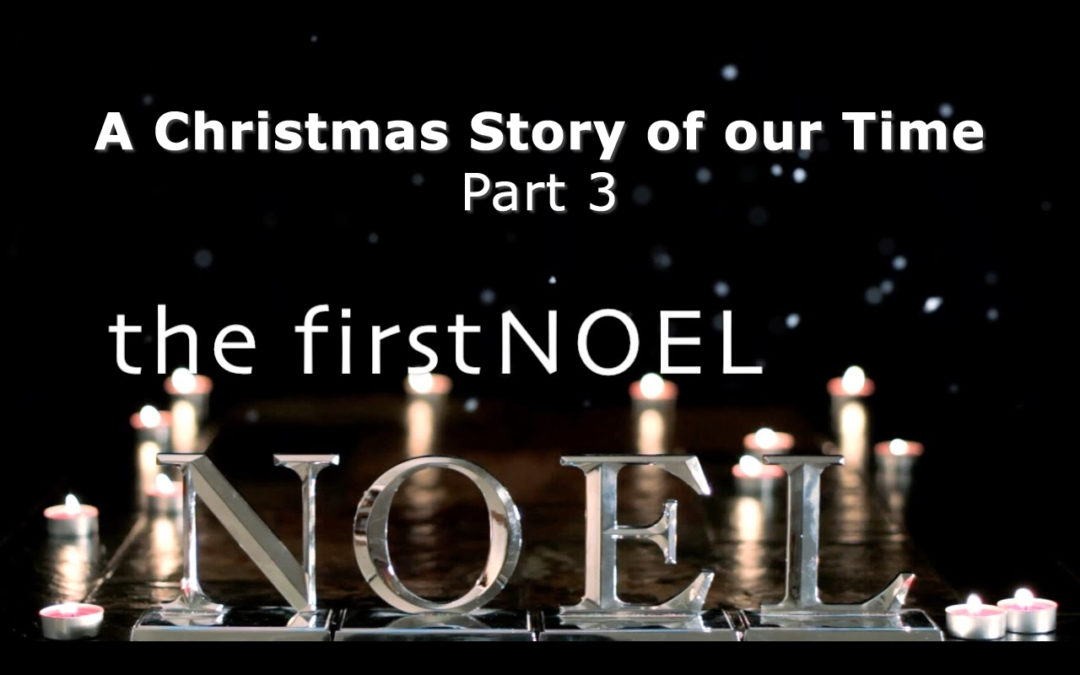 The First Noel – A Christmas Story #3
Oh, Come Let Us Adore Him

It is some hours later and Mary holds her newborn son in her arms. Joseph bears the fresh imprint of Mary’s fingers on his flushed cheek and nurses a range of bruises he received as he fell from the donkey. The innkeeper’s totty enters with a manger filled with straw and a bathrobe under her arm. “If ya don’t stop yellin’ and screamin’ I’m gonna havta ask ya to leave,” she said haughtily. “Other guests ‘ave started complainin’ innit.” Then seeing the baby she continued. “Oh, ain’t ‘e lovely, ‘e looks just like his dad.” She flashed a smile and several inches of thigh at Joseph, who snorted and looked away.

There was a noise at the door and a shepherd put his head around the corner. “Er, ‘ello missus. Could we park our sheep in here?” Catching sight of Joseph, he added breezily, “ello Joe, me old mate, fancy meeting you here!” Joseph and the Shepherd exchanged covert winks.
“I do not believe it,” said Mary. “Is this part of some hare-brained scheme to go out drinking while I’m stuck here with the baby?”
“No, No—of course not, love,” said Joseph. “But, now you mention it, we ought to wet the baby’s head.”
“That’s right love, it’s traditional,” opined the shepherd with another wink “But, I’ve left the flock double parked. Can I bring them in here?”
“Nuffink to do wiv me,” said the receptionist, turning to Joseph. “You rented the room.”
Mary interrupted. “There is no way you are bringing your filthy sheep in here, we’ve already got an Ox and a Donkey.”
“Shouldn’t there be an ass as well?” asked the Shepherd.
“He’s over there,” said Mary looking pointedly at Joseph.
“Look, I’m not being funny but I’ve left my mates outside with the sheep,” said the Shepherd. “We’ve got to do something with them; the Romans are cracking down on traffic offences—they’ll crucify me if I get caught double parked. Especially after the speeding points last week.”
“Got caught by one of the new pavement artists did you?” asked Joseph.
“Yeah, some bastard called Gatso who was hiding behind a bush. Didn’t know anything about it until the Pharisees sent me the fresco and a bill for fifty shekels. You could tell the speed the sheep were doing by the smudging round the edges. No point in denying it.”

“How much?” asked Mary.
“What?”
“How much is it worth to you to get the sheep off the street?” she asked again.
“Come off it. Joseph? You’ll let a mate park his flock in here won’t you?” wheedled the Shepherd.
Before Joseph could answer there was a sound of jingling and a camel walked in. It wore a fine leather harness ornamented here and there with seasonal, gold Christmas trees and plastic Santas.
“This cannot be happening!” said Mary. “I have just given birth half an hour ago and now I’m on some sort of city tour. Many more animals in here and we could open a zoo.”
Melchior entered behind the camel and bowed low before Mary and the infant. “We come from afar to worship the newborn king.”
“King who?” asked Mary.
Sidling up to Joseph, the Shepherd spoke to him from the corner of his mouth. “Watch him, he’s one of them loonies. I’ve heard about them; if he starts baying at the moon we’ve got to shove a stake through his heart double-quick.”
A magnificent Arab stallion entered behind Melchior.
“All that’s missing is another joker in a crown,” said Mary. “Oh and here he is,” she added as Balthazar entered behind his horse.

Joseph stepped forward. “Now look mate…I booked this stable…you can’t just…”
Balthazar bowed even lower than Melchior and interrupted. “We bring gifts for the King of Heaven.”
“Hold on Joe, did he say gifts?” asked Mary.
Another camel entered followed by Gaspar. Gaspar made as if to prostrate himself before the manger but hesitated when he saw that the new combo flooring option had been further up-graded by Balthazar’s stallion. Contenting himself with an extravagant bow he intoned solemnly: “Great omens in the heavens have led us to this humble stable. Humble, yes, but blessed this night by a new Messiah and a virgin birth.”
“They’re absolutely barking,” whispered the shepherd to Joseph.
“Yes, but rich. I think we’re on to something here,” he whispered back.
Gaspar reached into his saddlebag. “Long and hard I sought this gift for the infant son of God.” He produced a small bag bearing a logo something very like ‘Herods’. “I’m afraid…the…um, wrapping paper has come off… Hope you like it.”
Mary opened the bag and removed a chain of finest goldie-looking bling. “Oh it’s lovely!” she gushed, “Look, Joe, baby Jesus wants to play with it!”
“Jesus?” asked Joe. “I thought we agreed to call him Wayne?”
“Well it’s too late now, isn’t it?” hissed Mary. “That awful Chav has written his name in the register.”

Melchior stepped forward and presented his gift.
“Ohh…how…um…thoughtful,” said Mary, “What exactly is it?”
“It’s an incense burner with frankincense starter pack,” said the King. “Look, you set it up like this…”
Joseph looked over his shoulder and said. “Doesn’t that bit go in there?”
The Shepherd joined them. “I had one of these once, there should be a bit like a small washer that goes in there. You haven’t dropped something, have you?”
“Sorry…”apologised Melchior. “Mince pies always do that to me.”
The three men retired to a corner of the stable to assemble the burner in peace.

Balthazar advanced and placed his gift at Mary’s feet. “Pick it up you prat,” she said. “I’ve just given birth, I can’t bend all the way down there without pissing myself.”
Balthazar handed her the gift. “Oh…what an original…um…perfume,” said Mary, holding the jar at arms length and wrinkling her pretty nose.
“It’s myrrh,” said Balthazar smiling.
“What’s it for?” asked Mary.
“Um…er…masking nasty smells.”
“Well, it’s not doing a very good job then, is it? It smells like it came from a cat.”
“Trees, actually,” said Balthazar.
“Really? I’m sure you must have searched high and low for it,” said Mary dropping it behind the manger. “Such an imaginative gift.”

In the soft glow from an oil lantern, the animals; Gaspar and Balthazar gazed adoringly upon the mother and child. In a corner the Shepherd, Joseph and Melchior played happily with the incense burner. Slowly, one by one, the sheep crept into the stable followed by more shepherds. High overhead the star flashed on and off, angels sang in a heavenly choir. All was quiet; all was still. Then suddenly:

“Hold it right there. Nobody move,” said a cheery cockney voice at the door. A stocky man in a beret and artists’ smock who bore an uncanny resemblance to David Bailey, bounced in. “Hold it just where you are luvvies.” He whipped out a slate and began sketching frantically. “Hold the baby up a bit would y’ love…you over there…yeah you…turn that ox a bit so the light catches its eyes. Yeah, spiffing, mate…cheers. Shepherds, can you all stand together over there…y’ look like nothing on earth spread all round the bleedin’ stable…where’s the proud Dad? Well put that down and come over here, squire. Yeah, that’s right, near y’ missus. Kings, could you step back from the lamp a bit only I’m getting a lot of flare from the crowns. Oi mate, show some pride in your sprog. Y’ supposed to love ‘is mum, not scowl at ‘er. That’s it, put your arm around ‘er. No, love, not ‘is cheek, give him a proper smacker on the lips. That’s perfect. Hold it…”
Another five minutes of frantic sketching followed.
“Okay,” said the artist. “ere’s the deal. I keep the copyright for prints, greetings cards, nativity scenes, holy statutes, stained glass windows, etcetera—worldwide and in perpetuity, yeah? You get a print each to keep. Sound fair? Jolly good—sign ‘ere and ‘ere, thanks. That’s your copy, miss, er love…keep that and you can get ‘oly medals at ‘alf price during Passover.”

As quickly as he had appeared the artist vanished. Mary couldn’t help feeling that something very, very special had just failed to happen.

Far off a cock crowed three times…but that is part of another story entirely.