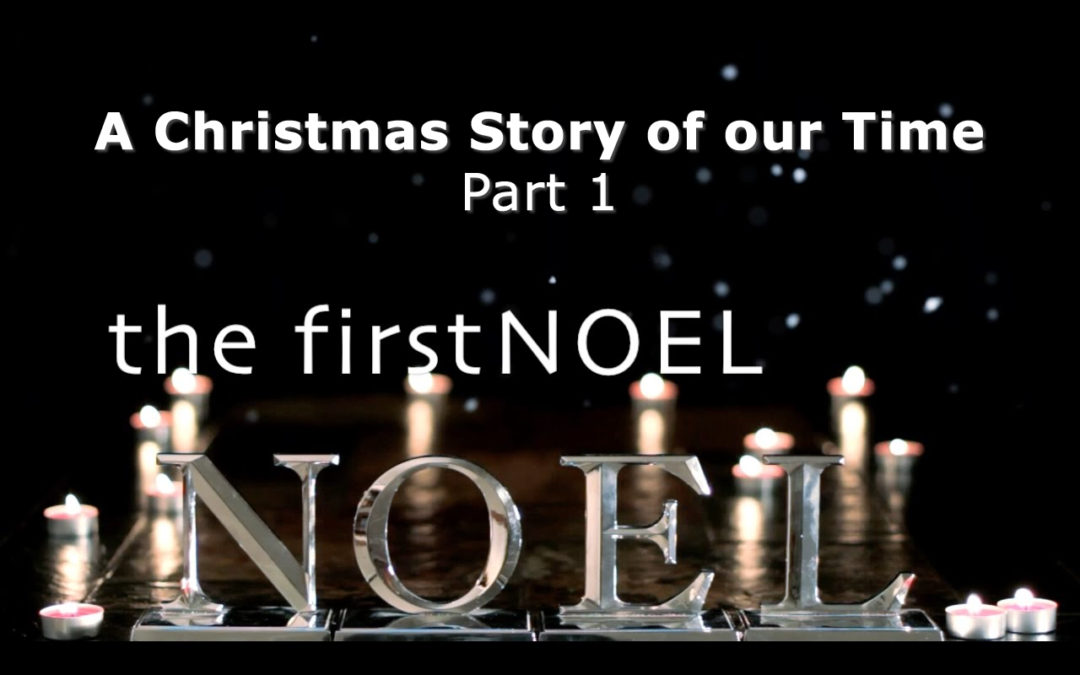 The lights of Bethlehem twinkled in the darkness. Mary and Joseph made their way wearily down the path into the valley. Mary sat astride Joseph’s donkey while Joseph held the halter and walked beside the patient beast’s head. Conversation had died some hours before. Mary was wholly absorbed with the new life that nestled within her swollen belly. Joseph pondered whether he would have enough money left over for a beer once he had bought swaddling clothes and a manger.

As they reached the outskirts of the town, they began to pass houses lavishly decorated for the coming season of goodwill. Gigantic snowmen on skis were illuminated by rows of oil lamps on every roof. Santa climbed tinsel ladders to every window. The sound of familiar Solstice jingles could be heard coming from every shop doorway; ‘I wish it could be solstice every da-ay. I’m dreaming of a white solstice. It’s solstice time, mistletoe and wine, the children shout get off that’s mine, innit! Once in Roy and David’s city, etc.’

“Bugger.” said Joseph. “I forgot it was bloody late night shopping—it’ll be a nightmare parking the donkey.”
“Come off it Joe. I’m not walking miles, not in my condition,” complained Mary. “You’ll just have to find somewhere, won’t you.”
“Alright, alright, I’m just saying it’s going to be murder,” said Joseph, testily.
“Oh don’t bloody-well start!” snapped Mary, administering a sharp slap to her husband.
“Ow! Don’t start what?” asked Joseph, rubbing his cheek.
“Don’t start going on about how we have to obey the bloody census again. I wanted to stay at my Mum’s, but oh no, that wasn’t good enough for you, was it? Dragging me halfway across the Promised Land because we haven’t got one of those silly identity tablets. Why haven’t I heard about this census, then? It’s just an excuse for you to meet your mates for a bloody piss-up. Don’t think I don’t know what you’re planning. I didn’t just fall off the Christmas tree you know!” Mary spat the words with some venom.
“I never said anything!” said Joseph, somewhat rattled. “And anyway, what do you mean, Christmas tree?”
“Look,” said Mary, “this is satire; artistic licence, okay?”
“Ah, right,” said Joseph “and the bit about the piss-up?”
“No, sunshine, that was the gritty reality of married life. I’ve got you taped; get used to it.” Mary folded her arms under her bust and looked away sulkily.

Joseph trudged on, looking at the map drawn on the back of a scrap of papyrus. As they entered the town proper, they joined a slow moving queue of mules, donkeys and ox-carts.
“Got to be somewhere round here,” said Joseph eventually, as they passed the Saracen’s head (on a pole, outside the Roman Legion Head Quarters) for the third time.
“Why can’t we just stop and ask someone?” said Mary, through gritted teeth.
“Look, if they see we’re lost some bloody Samaritan will mug us for sure; you know what they’re like.” Joseph replied. “Anyway, look it’s just there.” He continued, pointing down a narrow alley.
“What ‘No Vacancies’? You had better not have sodded up the reservation like you did for the honeymoon—if you can call it that!  What a disappointment!” muttered Mary.
“I heard that,” snapped Joseph. “There’s no pleasing you is there? I don’t know what you expected but it’s just not possible to satisfy you as a woman whilst simultaneously painting the ceiling and building a fitted kitchen. Ask anyone!”
“Well He could have done it,” Mary smiled wistfully.

“Oh yes, I thought we would get round to Him again. Look, we’re not all omnipresent, right? This marriage isn’t going to work if you keep comparing me with the Supreme Being, creator of heaven and earth. It’s no wonder I am beginning to have a bit of trouble raising the old trouser snake from his slumbers, who wouldn’t?”
“Do you want another slap?” asked Mary.
Joseph stepped nimbly out of her reach and knocked at the door of the inn.
A busty eighteen-year-old opened the door with dyed blonde hair tucked under a Burberry cap and sporting 8-inch diameter gold coloured earrings. The only thing thicker than her makeup was the bone behind her vacant eyes. “We’re full.” She said, by way of welcome.
“I think you’ll find we have a reservation—Mr and Mrs Smith?” said Joseph.
“Oh, Mr and Mrs Smith is it?” said the girl, looking Mary up and down with a knowing smirk.
“You don’t look old enough to be married. Anyway, I think you’ve been Mr and Mrs Smith once too often,” she added, looking at Mary’s swollen belly.
“I’m twenty-one,” snapped Mary, “And a virgin. The Lord visited me in a dream.”
“A dream?” laughed the girl. “That’s the first time I’ve ‘eared it called that. You posh tarts are all the bleedin’ same. This ain’t a bloody knocking shop, y’know.”
“What the bloody hell were you thinking of?” whispered Mary. “Mr and Mrs Smith?’ You idiot—we’re married, we can use our own names.”
“I thought it would be a bit… er… sexy…darling,” said Joseph, somewhat crestfallen. “You know like when you used to…”

“Look.” said Mary with exaggerated patience. “In case it has escaped your notice, I am nine months pregnant with the Son of God. The last thing on my mind at the moment is a distinctly amateurish groping from you.” Turning to the innkeeper’s bimbo she continued. “Haven’t you got anything at all?”
The girl flicked disinterestedly through some wax tablets on the desk. “Nah…not really…”
Mary, sensing weakness, asked. “What do you mean ‘not really’?”
“Well…we might ‘ave summink under our ‘Solstice super-break special four days for the price of five, male children under two go free, offer,” she said in a high-pitched, grating monotone. “Trouble is ya ain’t got no male littluns under the age of two, ‘ave ya?”

”Well, not yet,” gasped Mary as a contraction gripped her abdomen.
Joseph fainted.
“Oi – what’s wrong wiv him?” asked the girl. “Look, you can ‘ave the stable, bugger off quick before ya mess up me nice clean vestibule.”
Mary hoisted Joseph onto the donkey whilst the girl hauled on the rope that opened the doors to the underground off-street stabling facility. Following them into the stable she asked “Cow-shit or straw?”
“What?” asked Mary.
“On the floor, do y’ want cow-shit or straw? Actually, now we’re ‘ere I see the manager’s installed the new combo option. Cow-shit and straw, no extra charge innit. Will ya be wantin’ breakfast? We ‘ave full Roman or traditional loaves and fishes.”
Joseph groaned as he slipped from the donkey onto the floor.  Mary ignored him.
“Is there a surcharge for the full Roman?” asked Mary.
“Nah, but y’ better come early cos the Barbarians ‘ave it away wiv the pickled larks tongues before y’ can say Nero innit.”
Mary leant heavily against the donkey as another contraction came and went.
“Will y’ be wantin’ a manger?”
“Yes…and swaddling clothes—and make sure they’re not Burberry, I’m not wrapping the Son of God in any of that awful Chav tat you’re wearing,” said Mary, panting through clenched teeth.
“Y’wot? Y’ taking the piss? I’d watch it if I was you. I could report you.”
“For what?”
“Not ‘aving a ‘dentity tablet innit. Y’ s’posed to y’ know. ‘erods orders. Anyway, we don’t ‘ave no swaddling clothes. This ain’t a bleedin’ crèche y’know. ‘ow about a complementary bathrobe?”
“Yes, any thing you like,” snapped Mary, clutching her belly.

“Well if I can just take some details…” asked the girl as she started scratching on a wax tablet. “I ‘ave ya dahn as Mr an’ Mrs Smith, Herod Boulevard, Nazareth. Y’ want the solstice super-break special, full Roman, combo option on the floor, no extra charge for that, manger and a complementary bathrobe. Can I ask you to just gimme details of y’ unborn littlun, it’s part of the new census conditions that all names and addresses ‘avta be sent to King ‘erod innit.”
“Jesus Christ!” exclaimed Mary as her waters suddenly broke. “Jesus Christ.”
“…and sex” asked the receptionist, still jotting.

“Never again” panted Mary.  “Now naff off and leave me to die in peace.”