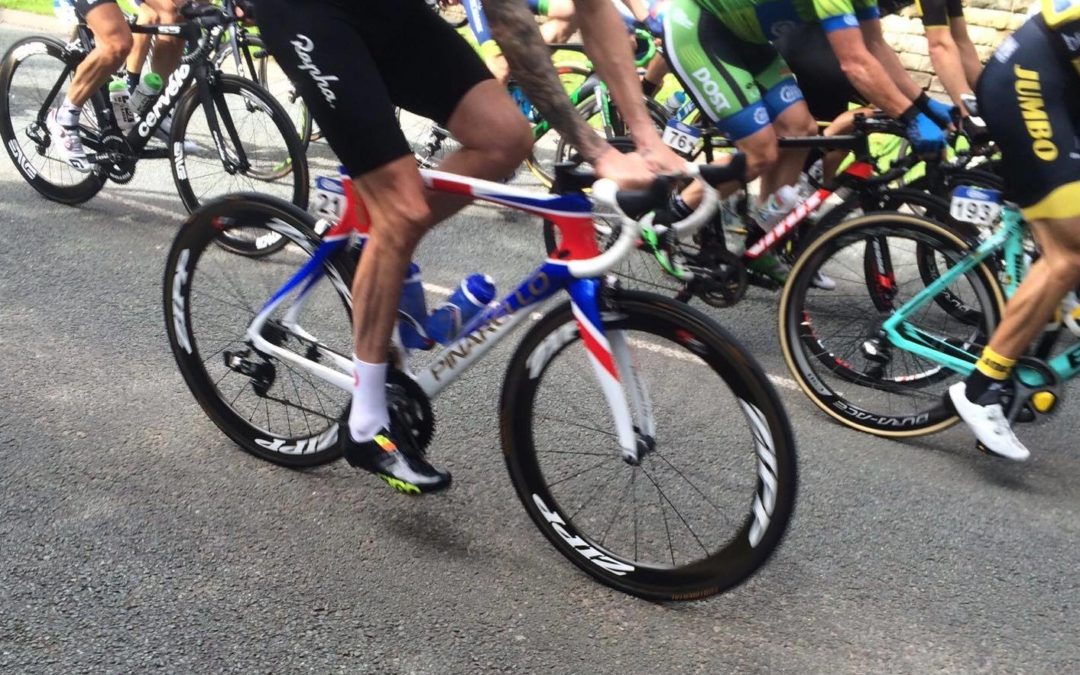 The 2020 Pro-Cycling Season, has well and truly started.

With the Tour Down Under (21st – 26th Jan) won by Richie Porte (Trek-Segafredo), all those fans are looking forward to a great year of cycling.

Out to the UAE in February, then the Classics from March…

With the highlights to come of the Vuelta a Espana, the Tour de France and the Giro d’Italia. Not forgetting the London Classic and the Prudential London 100.

To give a flavour of all the races to come, here are a few of the common words and phrases that you will hear along the way.

Autobus:
The last set of riders on the road, usually found on the Mountain Stages, comprising a mix of the Sprinters and the Domestiques. (See also Gruppetto).

Bonk (or Knock):
You’ll know it when you experience it. It is when your body runs out of easy to access energy and you drop off the pace, and sometimes out of the race.
Also called “hitting the wall”.

Broom Wagon:
This is an actual ‘wagon’ that ‘sweeps’ up riders at the back of the race who have to retire.

Chute (or Crash):
Most chutes/crashes are straightforward… with extensive Road Rash (see below) and bruised egos. However, some times the crash is very serious, from a fractured collar bone (quite common) to life-threatening (not so common).

Commissaires:
The officials who oversee the race and ensure the riders stick to the rules. (The referees.)

Directeur Sportif:
The Team Manager. Often an experienced ex- pro rider. The DS updates the team (via their radios) on the tactics of the race, usually while driving the Team Car.

Domestique:
The ‘helper’ or ‘servant’ rider, who are there to help the Team Leader, the Sprinter, or the Climber, depending on the days stage. They help shelter the stars from the wind, collect extra water bottles (bidons) and food. They also help chase down any breakaway attacks.

Flamme Rouge:
The ‘Red Kite’ that marks the final kilometre of the days stage.

Lanterne Rouge:
The final rider in the overall classification, or the final rider on the road. After the red light on the train’s last carriage.

Lead-Out Man:
He will be directly in front of the teams Sprinter, to protect him from any attacks and to increase the pace so that the Sprinter can come out of his slipstream accelerating towards the finishing line.

Musette:
A canvas bag, handed out at Feed Stations, containing food and drink for the team.

Peloton:
‘Little Ball’, this is (often) the main group of riders in a race, who bunch together from the wind, and make use of the drafting that helps them maintain a constant speed, while not having to work as hard.

Puncheur:
A rider with a fast acceleration, up short but steep gradients. They often rival the Sprinters, and work with the Climbers to help them up the climbs by keeping the pace high.

Road Rash:
A skin injury caused by sliding along a road surface after a crash. Lycra, does not offer a lot of protection during a crash, so most riders suffer extensive road rash, when hitting the road at 30mph.

Rouleur:
A rider who can cycle, long, flat sections for a considerable time.

Soigneur:
A Team member who helps the riders, preparing and handing out the food at the Feed Zones and often massaging the rides after each stage.